as I’ve mentioned previously, we’re running some workshops to review some of our programmes with a view to changes needed in the future. As part of this process we held our first hybrid teaching workshop this week, and I thought I’d write about the general process before I write about the outputs

“Our intention is to run this workshop in a hybrid fashion - with people in a location tbc … and also online. We’ll see how much of a car crash that is …”

That’s from the invite to our latest teaching workshop, which we ran yesterday with several participants physically present in one of our seminar rooms, and more participants joining in from a Teams meeting online. It was our first hybrid teaching workshop with staff (though not our first hybrid teaching session by some distance[1]). I was a bit concerned whether anyone would actually turn up in person, especially as the weather was a typically rainy Cardiff day, but in the end we had a bunch of ‘real’ people in the room, and a bunch of equally ‘real’ but less physically present people online. It worked well, and I think it’s worth getting some thoughts down about the process. 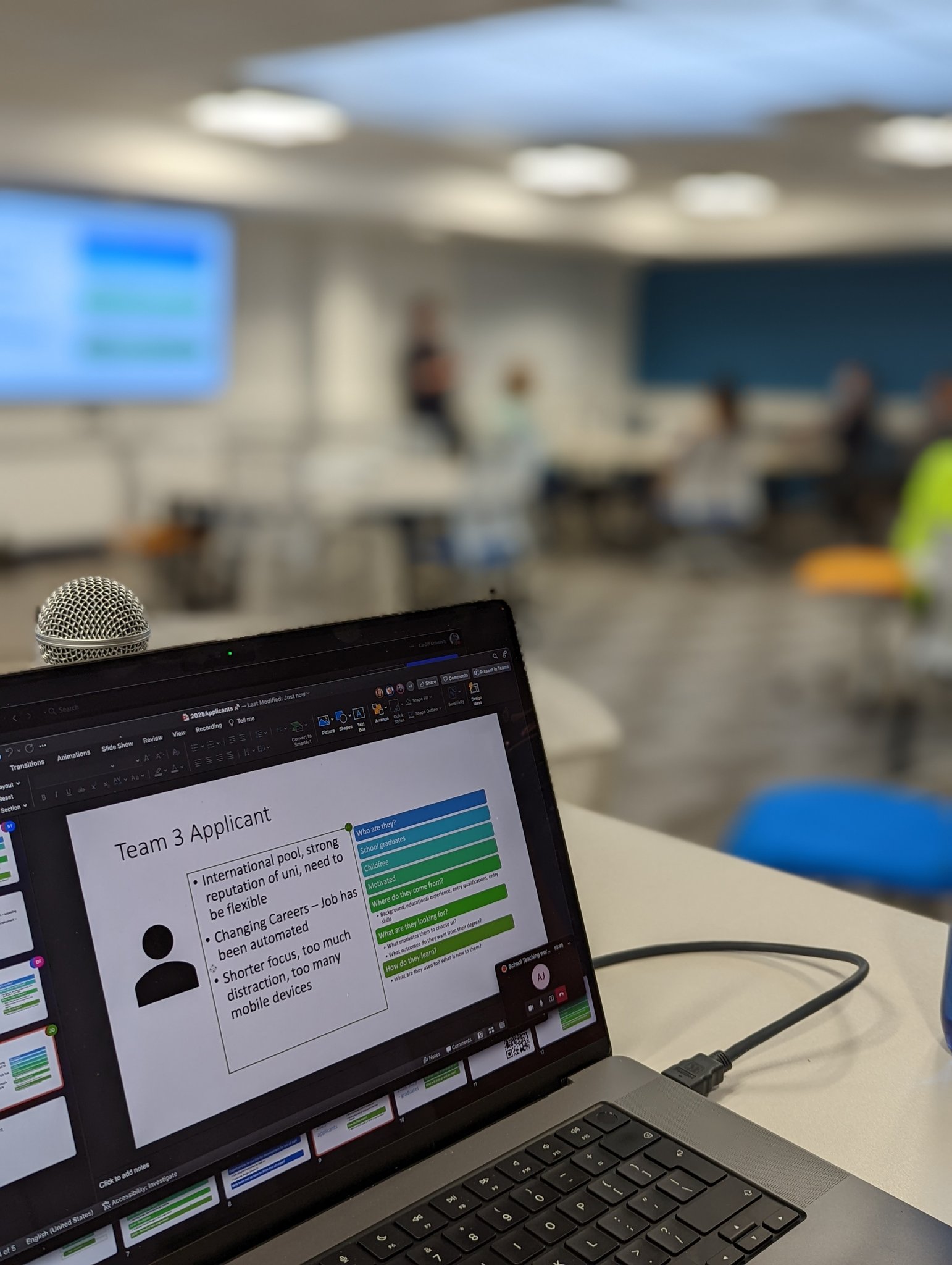 The first thing that helped was that the session was structured very much as an active session to facilitate reflection in and gather input from the participants, but with a slight cheat in that the amount of ‘whole group’ discussion was artificially limited. The basic structure was:

Each activity was run as a group discussion session, with groups of 6-8 people talking about the topic in question for 15-20 minutes, with a feedback session after each discussion. In order to capture the discussions the group present in the room had access to flipcharts and pens, but being a bunch of academics naturally gravitated to the whiteboard. Online the groups were in breakout rooms within the Teams meeting, and they all had access to a shared powerpoint file, with an individual slide for each room on which they could capture their discussion points. 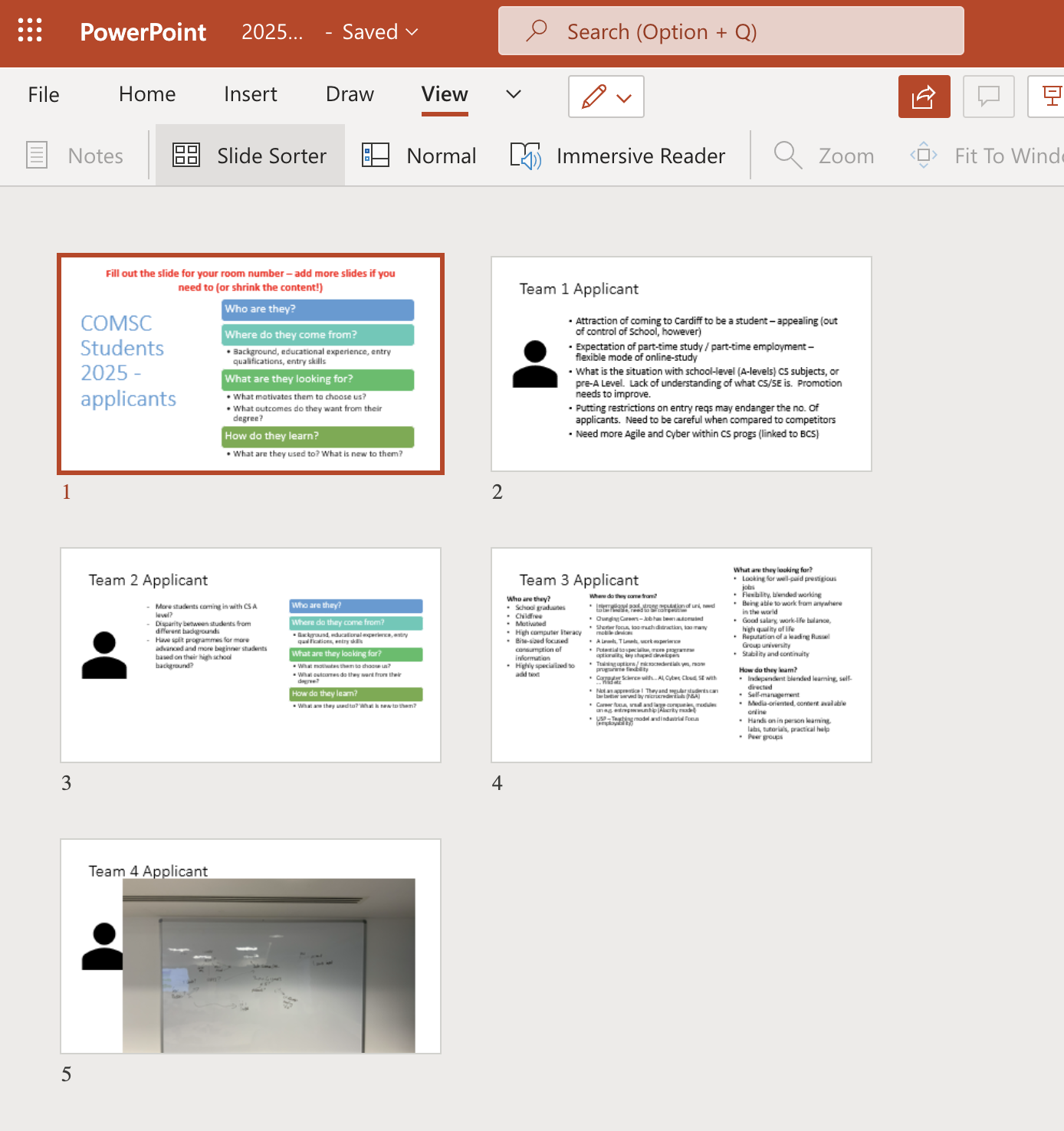 The online meeting was in Teams and my laptop was plugged into the room’s AV system so that the teams meeting itself was displayed on the screens in the room. I kept the directional microphone on the lectern pointed at the laptop so the participants in the room could definitely hear the people online. A few of the ‘physical’ participants had their laptops with them and were also signed into Teams, so whenever they wanted to contribute to the discussion they could unmute and speak towards a device near them rather than relying on my laptop mic in the centre of the room. I had to remember to mute the audio on my laptop during those moments to avoid horrible feedback.

Did it work? Yes. Participants both online and in the room were able to participate in the session. Some of the good things that worked well:

Some caveats on this though:

Really though, the only thing I’d change in future is try to have more of a balance of in-room vs. online participants, so perhaps at the next one we’ll try and have cake to entice a few more out of the digital space. Also we’ll not clash it with an event in the main school building that’s booked all the good seminar rooms, so we can hold it in the same building that people actually work in.

Other people also seemed to think it worked:

Some thoughts there on the Hybrid workshop we ran. I thought it would be useful for people to hear how it went, before we dig into what we actually got out of it.

Next: Computer Science Students in 2025